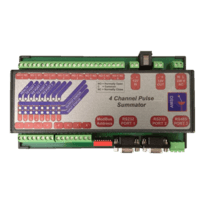 The 4 Channel Pulse Summator is designed to add up to 4 pairs of input pulses. The pulse weight for each input and output can be programmed individually. In case of electromechanical input pulses a programmable debounce for the inputs are provided.

The output pulse duration of the 3 relay outputs are adjustable within the range of 50 … 2000ms. This duration can be specified in terms of a minimum on and a minimum off time. The device is able to buffer output pulses for each output.

Pulse weights and debounce times for each of the channels can be programmed with the provided Genlog Software. In the Genlog program click on the Configuration icon. The following screen will appear allowing the user to program the relevant parameters.

Enquire to find out more